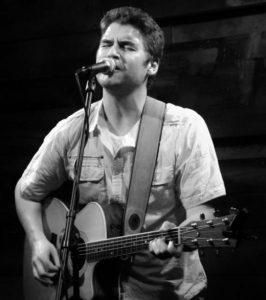 Picture was taken by Jenny Franck at our show in Chicago at The Uncommon Grounds. Jenny was great and the venue did a great job with sound and the food was excellent.

This coming Wednesday I’ll be returning to the Haymarket Whiskey Bar in Louisville joined with Louisville songwriter, Nick Peay, and acoustic group, Hoghead Blues. Following that show I’ll be in Cincinnati returning to Sitwell’s for a solo acoustic show.

After these two shows, I’ll be heading up to Canada to play that country for the first time. I’m looking forward to visiting Windsor, Toronto, and Crystal Beach. Looking forward to sharing music at these new venues and cities.

Studio time booked in early June for a song on the new album. I have a few unfinished songs I need to tackle and the writing should be done.