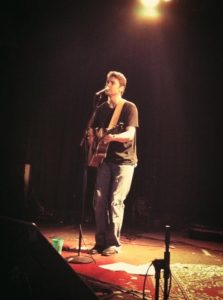 Had a great time last week returning to my home state of Indiana. Caught up with family and friends I hadn’t seen in a while. Enjoyed the show at Birdy’s in Indianapolis (picture above). Will definitely return for another sometime in the future. It was good being on campus at IU in Bloomington for a show the next night. Nice to see some old haunts still around.

This week I’ll be heading up to Lancaster, PA for the Launch Festival and Conference. My showcase is on Friday night at Lancaster Dispensing Company. I’ll be heading to Cleveland, for the first time, at The Barking Spider Tavern on Monday night. Tuesday night I’ll be in Chicago at a new venue, the Uncommon Ground on Clark, with Chicago songwriter Jenny Franck.

I’ve been adding some new shows to the calendar. You can keep up the schedule on here.

Hope to see you out.